We are an American Civil War re-enactment group, based in the South of England, part of the Southern Skirmish Association, (Soskan). We recreate, live and fight and celebrate the union regiment – the Bucktails.

About Company I – The original Company I, (McLean County Rifles) was mustered into service on May 30th 1861 and was commanded by Captain William Blanchard

In April 1861, when word was received of Kane’s recruiting for the regiment, the companies that eventually became C, G, and I, gathered on the upper reaches of the Susquehanna River and floated by raft to Lock Haven, where they then boarded trains to Harrisburg. Before leaving home, the men of Company I, recruited in McKean County, received a wool bunting flag to take with them. The lead raft carried this flag.

If you are interested in joining or in what we do drop us an e-mail at info@bucktails.co.uk or visit our recruitment page for more information. We have members of all ages from 13 to 60+.

Fall in soldier! Join us on parade! 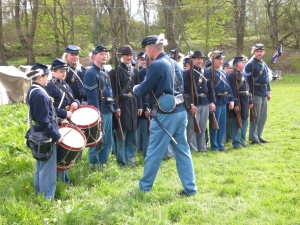